What is Total Hip Replacement? 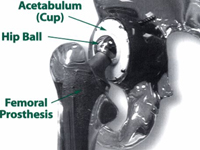 When we say “total hip”, we are referring to the replacement of both of the working parts of the hip. This includes the socket side of the hip which is part of the pelvis. This is called the acetabulum.

The other part is the ball, which fits into the socket, called the femoral head which is the uppermost part of the thigh bone. The acetabular component (cup) is a metallic hemisphere with a very hard plastic liner which fits into the patient’s pelvis where his original socket had been. The ball portion of the hip is on the end of the femoral component.

After the surgeon removes the patient’s worn femoral head, he opens up the canal of the femur (thigh bone) and inserts the femoral component in to the bone. The ball and socket are then fitted together, just as the original hip had been.

Dr. Parsley's surgical practice is devoted to the diagnosis and treatment of Arthritis in Hips and Knees...