Home » In the News

HOUSTON – A man is recovering after an operation he’s needed for 20 years. After numerous unsuccessful surgeries in Guatemala, a local nonprofit helped get the man to Houston for the procedure.

Twenty years ago this week, Juan Alberto Sandoval was hit by a bus in Guatemala.

He said he was hospitalized for three years following the accident, he’s been through countless surgeries for pain, infections and the removal of one leg. More recently, he had a surgery in an effort to save his other leg.

“Mi esperanza es caminar,” Sandoval said, noting that his only wish is to walk one day without a wheelchair.

So in Guatemala, the medical missionary Faith in Practice introduced him to orthopedic surgeon Dr. Brian Parsley of Memorial Hermann Orthopedic & Spine Hospital.

I’m pleased to be at The American Academy of Orthopaedics (AAOS) 2016 Annual Meeting which will take place in Halls WA-WB at the Orange County Convention Center in Orlando, FL on March 2-4, 2016. The technical exhibits at the Annual Meeting offer you the single best opportunity to compare products, attend demonstrations and have questions answered by representatives from over 650 companies from around the world. This is the largest gathering of companies displaying products and services specifically for the orthopaedic surgeon.

What he gained was no pain

For the last two years, every time Raul Leonardo Sagastuy moved, it hurt. Whether he was walking, sitting or standing, the 49-year-old Guatemalan’s right leg ached.

His case was too complex for physicians in Guatemala, and Sagastuy’s frustration and worries began to mount as his condition worsened.    But last September, hope arrived in the form of Dr. Brian Parsley, an orthopedic surgeon from Houston, who wouldn’t take “no” for an answer.

The severity of Sagastuy’s case was rare — Parsley estimates that no more than one in 100,000 people require such an operation — but he believed it could be done.

By May 30, Sagastuy was in an operating room at the Houston Orthopedic & Spine Hospital, where Parsley replaced the man’s artificial hip, thigh and knee, inserted a new implant in the upper part of his calf, and reconstructed his pelvis.

Parsley and his colleagues did it all for free.

“He’s an angel,” said Sagastuy, now well enough to fly home but with a new lease on life. “That word describes everything.”

Sagastuy met Parsley after he heard there was a medical mission in Guatemala. Unable to work, Sagastuy had no funds to travel or search for help, much less afford any treatments that might be available.

Parsley, an assistant professor at Baylor College of Medicine, has gone to Guatemala on medical missions for about 18 years with Faith in Practice, a nonprofit group that serves the health needs of the poor in the Central American country. Bringing equipment and artificial joints with him every year, Parsley said he’s able to do most of the procedures he needs to perform in Guatemala.

“But Leo’s case was just too complex,” Parsley said, recognizing quickly that he would have to get his patient to the U.S. for proper treatment.

Sagastuy first was diagnosed with osterosarcoma when he was 18. Initially, his parents had the means to take him to Southern California, where surgeons removed the upper half of his thigh bone and replaced it with an artifi- cial hip, Parsley said. But 15 years later, the prosthesis had broken down.

“Unfortunately, the bone, because it had been delayed in getting treated, was so damaged that they had to remove his whole thigh,” Parsley explained.

During a second surgery in California, surgeons implanted an artificial thigh bone and knee, as well as an artifi- cial hip. Sagastuy returned to Guatemala better, and able to walk and work.

But over the past few years, the prosthesis again began to fail. Sagastuy’s pain increased. Eventually, he quit his job at a steel company, resigned to odd jobs he could do from home to help support himself and his 19-year-old daughter, Isabela.

By the time Parsley met Sagastuy, his knee implant had failed, causing the bone to break there. His pelvic implant also was close to severe failure.

Then, about two months ago, Sagastuy said he received an email from Parsley, saying the prosthetics and funding for the trip to Houston had been secured. He and his family were overjoyed.

“There are few times in my life that I felt this much emotion,” said Sagastuy, whose optimisim always kept him hopeful.

The surgery proved challenging. Parsley said more than 60 percent of Sagastuy’s leg bones had to be replaced with implants. The surgeon said he used about eight containers of bone graft to replace missing bone in the pelvis.

Parsley was able to get everything in Sagastuy’s case donated, from the anesthesia to the rehabilitation services at the hospital. The prosthetics were donated by Stryker Orthopedics and DePuy.

After about two weeks of rehab, Sagastuy was ready to return to Guatemala. In two months, he should be fully recovered, and the first thing he hopes to do is look for work.

“It’s a difference between night and day,” said Andrea Sagastuy, who accompanied her brother to Houston. “He feels like another man, like he has another chance at life.” anita.hassan@chron.com 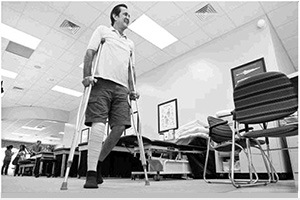 Dr. Parsley's surgical practice is devoted to the diagnosis and treatment of Arthritis in Hips and Knees...